Description: 4 short pieces and one slightly longer, with five mottos from the poet Stefan George.

Availability: As it seems, still obtainable on demand with Universal Edition. 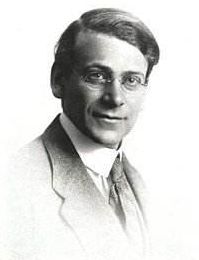 Egon Wellesz (1885-1974), born in a wealthy Viennese family, was in 1905, together with his close friend Anton Webern, and Alban Berg, among the first private pupils of Arnold Schönberg, and therefore part of the famous circle around this composer. In 1908 he also got his doctorate in musicology. He would compose a large, diverse body of works: 112 opus numbers; piano music, songs, 3 ballets, 6 operas, 9 symphonies, 9 string quartets, and many large pieces for solo voice, choir and orchestra. In 1938 he would emigrate to England.

But now we are in 1917. Schönberg and Webern write “pantonal” music since 1908. Wellesz himself had composed already quite a bit: orchestral works, songs, piano music, a ballet, and he just finished a second string quartet. And it is war. It remains probably impossible for us to imagine what that meant. Schönberg, after almost a year of military training and subsequent hospitalisation because of asthma and other illnesses, was released with great difficulties. Webern followed military training until 1917, but was not sent to the front. In Vienna, it was almost impossible to get food and coal. Wellesz, luckily, was deemed unsuitable for military service because of an old operation. He went on working as a university teacher and doing musicological research. He already published work about Venetian opera, Gregorian chant, Byzantine music, and for example wrote about recent developments in French music.

The 5 Idylls opus 21 have a remarkably French and lyrical character. Wellesz already wrote extremer music. Moreover, it doesn’t seem the proper moment for this tingling, splashing nature lyric, which definitely heard about Debussy, but sometimes sounds sharper, and sometimes more diffuse. Bur then again maybe it precisely is…
It’s music from a boundless airy world. But also from a transitional period, in which, after the discovery of unprecedented new possibilities, for a short time everything may exist side by side, circling around and dissolving in each other: clear diatonic periods, fourth chords, supplemented pentatonic scales, bitonal diatonics, typical piano chords (for example white thumb, the rest black), fragrant, “thick” blurred sounds, sharper atonal polyphony, etc. Very lavish and savoury! But everything is held together by a strong sense of harmonic tension, between often provokingly “dissimilar regions”.
And also by the constant use of the same intervals; seconds, thirds, fourths, and lots of fifths in the bass, which makes melodic lines and harmonies sound somehow familiar. This perhaps is a weak point. The melodic material now and again sounds a little pale, however improvisingly or naturally it presents itself: often waiting, transforming into swerving irregular ostinato motives, or faraway signals, and then again strongly lashing up. For really, all in all this is well sounding and surprisingly atmospheric music.
Music from before a new system: not pedantic, but freely blowing everywhere.

For more information about the composer: look at the nice, informative website of the
Egon Wellesz Foundation (see: LINKS).