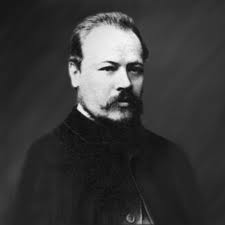 Lyadov was born in St. Petersburg in 1855 and died in 1914 on his beloved property of Polïnovka. Both his father and his grandfather were conductors, and notorious for their unreliability. Lyadov himself too has often been reproached of laziness (for some time he was expulsed from Rimsky-Korsakov’s composition class for failure to attend). That may well have been, but he was also extremely critical of his own work. He didn’t write any big works, although his friends repeatedly exhorted him to do so. One can assume that he restricted himself to what he felt at home with. This would be consistent with his extreme desire for liberty and aversion from every external pressure.

About 2/3 of his 67 opus numbers were written for solo piano. They contain some 150, mostly short pieces, miniatures even, but by no means easy to play. Every one of them tightly written, with a lot of detail. 31 Preludes, 15 Mazurkas, 5 Etudes, a Barcarolle…Yes, of course: Chopin! But there is something else: a number of Fugues, and a surprising 39 canons: a lifelong preference for counterpoint.

Lyadov’s first opus numbers for piano (opus 2-8) evidently smell of Schumann (except the Etude opus 7, dedicated to and sounding like Balákirev). From opus 9 onward suddenly the Mazurkas appear, and the Preludes. They’re not Chopin-Mazurkas. Now they sound Russian, then Polish, or even Oriental (think of Borodín). And all display this beautiful, elegantly precise polyphony, which carelessly seems to produce the harmonies.

The three Preludes of opus 27 are examples of another important trait in Lyadovs music. He was manifestly fond of Chopin’s piano music, and must have studied it thoroughly. In certain passages from the Etudes, but especially in the Impromptus, he must have found something hypnotising, to which he returns time and again, and which he tries to evoke, to touch upon in many of his own piano pieces.

It’s a very precise, minimal process. One or two melodic lines, above a melodical accompaniment in widely broken harmonies, everything in a continuing flow of crochets and semi-crochets, all very well-known. But it seems as if the logic of precisely these two, three slender, accurate lines against each other starts a process which, without any human intervention, produces music on its own, using the tension of small shifts, jumps, up and down, indefinably happily-melancholic. It is music which seems to be able to continue eternally in ever changing tints and shades. The end always comes unemphatically and as if by accident.

I call these Lyadov’s little Chopin-machines. It’s as if something out of Chopin’s music came free and goes on making music without him. It still sounds like Chopin, but became something entirely different. Beautiful!